Today we headed back into the central Serengeti for another 2 days.  On the way we saw  lappet-faced vultures eating what we thing was a wildebeest.

We arrived back in central Serengeti around lunch time and headed for our picnic spot with a view of the hippo pool.  It was entertaining watching the hippos.  When we first got there, Bob wanted a closer view so he went past the fence we were supposed to stay behind right down to the beach.  All of a sudden we saw a huge tidal wave of hippos moving towards him with considerable speed – like ‘get the hell off my beach’.  It was pretty funny to see but unfortunately I didn’t get a video.  The other funny thing about hippos is that when they poop, they stick their butts out of the water and twirl their tails like a helicopter spraying shit (probably where the term “shit hit the fan” came from.) 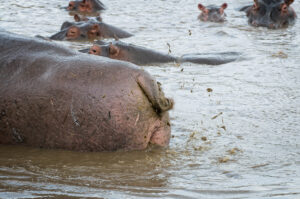 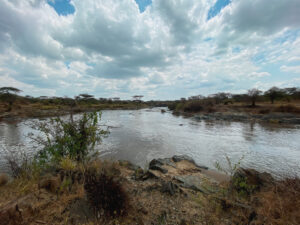 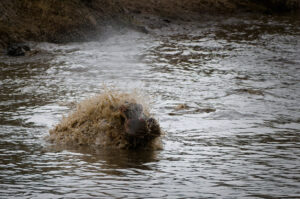 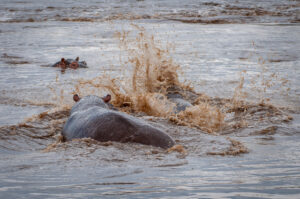 After lunch we drove around in search of a cheetah.  When Ibrahim spotted one, he did a little happy dance 😊  It was quite comical – first he spotted it from like ½ a mile away (WTF).  But then we noticed a jackal following behind the cheetah barking at it.  It sounded just like Toby!  There was a herd of gazelle that the cheetah was stalking and the jackal was like “come on – go get one of them – you can do it!”  He was like a little cheerleader.  But the gazelle were aware of what was going on and were moving away.  All of a sudden the cheetah stopped, turned around and went the other direction.  The jackal was like “WHAT? Come on man. Turn back around and lets get us a meal.”  It followed the cheetah for a little bit but then decided that the cheetah wasn’t going to get anything and departed.  I guess jackals are scavengers and get the left overs. 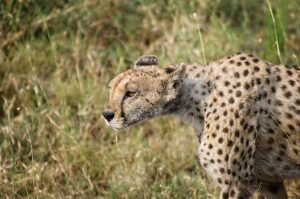 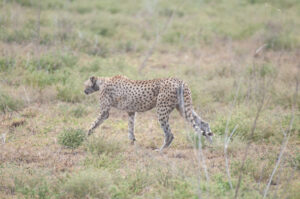 Anyway, we turned the truck around and started following the cheetah.  We were all standing up in the truck.  At one point, Ibrahim basically slammed on the brake and I went flying from the middle back of the truck to the front, over the top of one seat and crashed into either the side of the door jamb or the bar that separated the back from the front on my back.  I didn’t think I could move – all of the air went out of me and I couldn’t breathe for a bit.  They got me up and I’m not gonna lie – I had tears coming down my cheeks – right under my left shoulder blade it felt like I cracked a rib, not to mention my left shoulder was already damaged.  I made it thru the rest of the day very carefully, mostly sitting.

Then we left the cheetah since it was walking in the opposite direction and no other life was around. Damn – I really wanted to see it run 60 miles per hour and chase down a gazelle.  Maybe tomorrow.

Just when we thought the fun was over for the day we were the very first truck to come upon 2 female lions in the middle of the road drinking out of a puddle.  We pulled up and stopped fairly close to them and then I saw the big male in the middle of the grass about 10 feet away.  And it gets better.  Shortly after came 3 baby cubs that were approx. 2 weeks old.  They were so cute.  They were playing with each other and jumping on their mama while she rested in the road.  They were meowing and making cute little sounds, then started nursing.  It was a really great find.  We were there all by ourselves for probably 10 min before any other trucks showed up.  The male never came out of the grass, in fact he was napping in Kona fashion.  Lazy ass man! 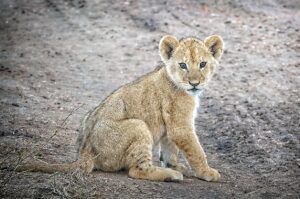 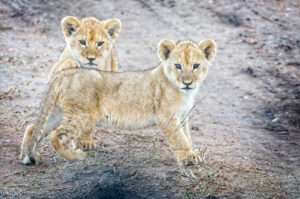 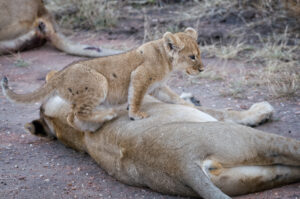 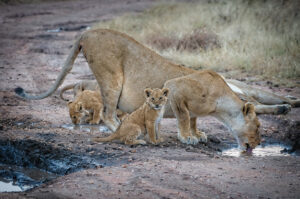 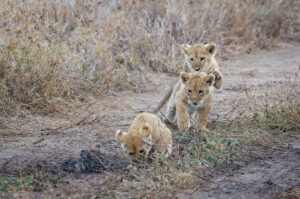 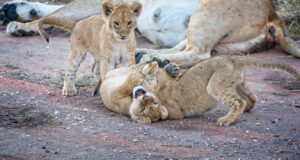 During the day we also saw Fishers Lovebirds which were so pretty – they looked like little green parakeets, a snake eagle, and lots of acacia trees.  To top it off, we ended up at the Tanzania Bush Camp which is where we’ll stay for the next 2 nights. This place is by far the best out of all 3 camps.  It has a huge cocktail lounge/bar area which also doubled as the front desk and charging station, a huge dinner tent, and lots of very large tent rooms.  Ours has 2 queen beds, electricity all night (just no charging) and it just felt clean and nice. While we still had to order hot water for our showers, it was actually hot, lasted for the whole shower, and came out in more than a trickle.  I need to take a video of this place before we leave (which I did).

Back to Africa Day 6