We were headlights down the road at 6am today in search of the Hadzabe bush people.  Today we got to ride in the nicest of the 3 trucks (each seat has a cushion).  We drove to the “town” of Eyasi to the “office” of tourism to pick up our guide who would show us where to go and translate everything for us.  Our guide’s name was Hassan and he rode in the truck with us!  This was great because we got the inside scoop on the tribe and how they live and what to expect, more or less.  Something very interesting is that when they get to marrying age (around 18 for men and 14-16 for women) the boy will find out from the girl if she’s interested in marrying him.  If not, he’ll look for someone else.  But if yes, then he has to kill a male baboon and bring it to her dad, then they can be married.  Once they get married, the woman has no more say about anything.  She just does as she’s told.  A man can only be married to one woman, BUT he can trade with other men for their wives…  They can make a deal to ‘trade’ wives for a week, a month, a year, forever, whatever.

We also learned there are very few nomadic people left (maybe up to 1000).  They pick up and move often, so their ‘houses’ are just shelters, nothing permanent.  During the rainy season they move to the caves for protection.  The rest of the year they move around a bit, hunting and gathering.

We found them in a really dry area amongst some trees and bushes.  Our guide knew where to look because he grew up as a cattle herder and often hung out with them as a child learning their language.  When we got there, we had a picnic breakfast while Hassan went and talked to them.  I’ve never seen a picnic like this before.  They put table clothes on the hoods of 2 jeeps and brought out glass juice cups, porcelain coffee mugs and the food – consisting of their version of pancakes (more like a crepe), boiled eggs, bread, bananas, and sausages.  The juice was watermelon which seems to be really popular around here (and my favorite).

After breakfast we got to meet the people and see them in their habitat.  It was a bit weird – all of us showing up with camera gear to take their pictures.  It felt like an intrusion of their privacy.  But as the day went on, it got better.  They had just come back from a hunt and had killed a dik dik, which was already skinned and ready to cook.  What struck me as strange was their clothing.  I assumed they would look more like the bush people in our textbooks but most of them had western clothes on – tshirts and shorts from the USA.  They were all tattered and dirty but still US clothing.  Then the men had something over the top like a goat or baboon skin, usually decorated with beads.

When we arrived they lit a fire and started to cook a rabbit – fur on and all.  They put the rabbit in the fire until the hair burned off and the skin was a little crispy.  Then they skinned it, removing any remaining fur, then cut it down the middle, removed the guts (which were given to the dogs), then finished cooking the rabbit.


After that, they showed us their bows and arrows and how far they could shoot.  The women and babies sat nearby in their own area talking amongst themselves.  Then the boys took us out on a hunt.  We were bushwhacking for sure through all kinds of thorn bushes and trees.  One boy shot an arrow up in a tree and on his first shot, got a bat.  Then we kept walking and walking – some of us getting lost – it was impossible to keep up with these boys.  I’d say they were between 7 and 10 years old.  Finally they saw a squirrel up in a tree and another boy got it with one arrow!

Next up was a squirrel and bat BBQ.  The ‘chief’ of the people was there too (the oldest guy of the ‘village’).  He started a fire using friction of one of the arrows (or a stick) on top of a knife with wood shavings to catch fire.  It took him like one minute and voila – there was fire.  They cooked up the squirrel and the bat – the chief got to have some first, then the kid who shot it, then the others.  They even shared it with some of our group.  No thank you.

Then we headed back to where some of our group got to try to shoot their bows and arrows.  Glenn did pretty well, almost hitting the target on the 3rd try.  Then we got to see the items they make – some wood carved knives, spoons, forks, and beaded jewelry.  We bought a necklace, bracelet and knife.  Then they asked us to hold up the items we bought and the women came over and we got to meet the woman that made the items we bought.  That was the best.  An older lady made the necklace and knife, and a young girl with a baby made the bracelet.  It was very fulfilling.  They were so proud of the items they made and that we picked them. 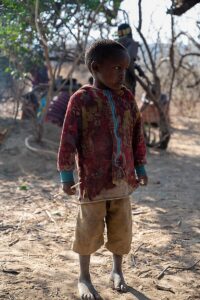 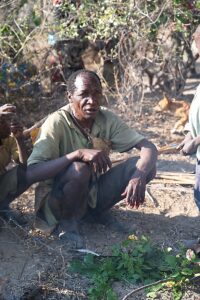 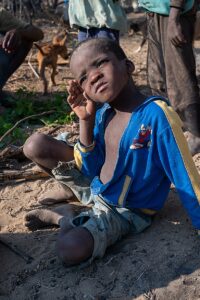 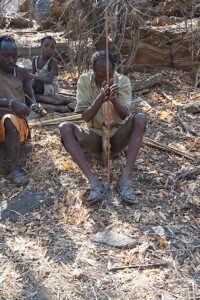 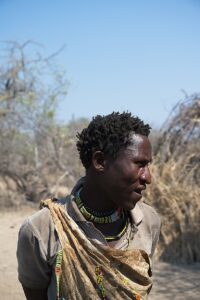 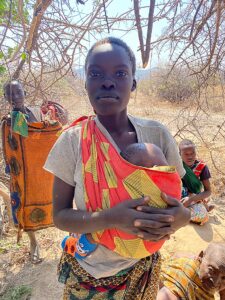 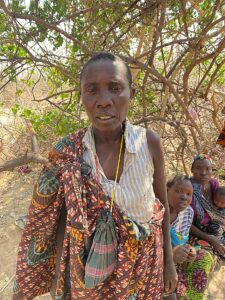 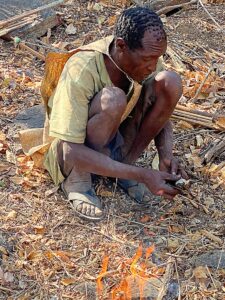 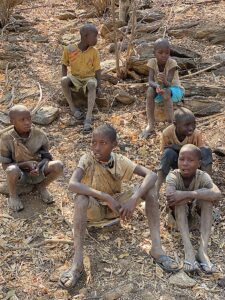 We left there and moved on to a very dry salt lake.  We stopped at a hot springs which is where a lot of them come to bathe in the warm water or wash clothes, but it was just a trickle.  Then we drove through a village named Barazani on our way to visit another tribe called the Datoga.  All of the villages were so poor looking but every time we drove by a person, they would wave and smile at us.

The Datogas are the next door neighbors of the Hadzabe but quite different.  One man can have as many wives as he can afford.  He must pay the father of the bride 10 cows for each wife.  The chief of this tribe had 3 wives.  Their trade was making jewelry and arrowheads out of copper and other metals.  We got to go into their hut and they also showed us how they melt the metal to make the jewelry.  We bought 2 bracelets and an arrowhead from them.  They were all so friendly. 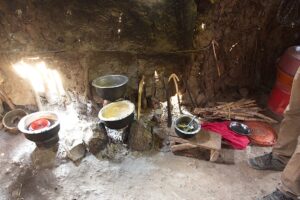 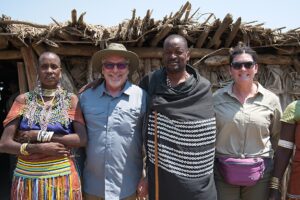 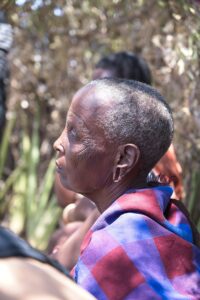 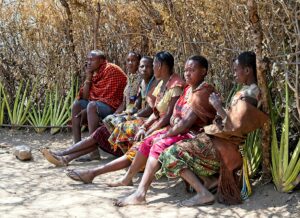 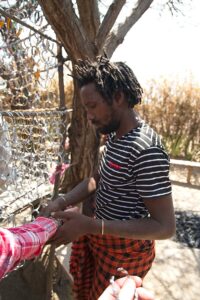 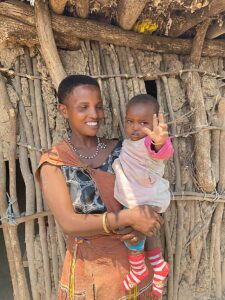 Then we had an adventure on the way back to the hotel…We were on the dirt road and a big truck was in front of us and we were sucking his dirt and fumes so we went to pass him on the right and he moved over and didn’t let us go ahead.  We tried this twice with the same result.  Our guide Yusuf was getting pissed but decided to stay back.  Then another truck passed us and I thought – ‘crap – I wonder what will happen when he tries to pass that truck.’  We didn’t have to wonder for long.  Pretty soon we came upon the truck pulled over and stopped on the side of the road and the truck that had passed us was parked sideways in front of the truck that was not letting us pass.  We pulled up and blocked the truck in.  The other truck driver (the one that passed us) was out of his car and yelling at the truck driver.  Yusuf was yelling as well and jumped out to talk to the nice driver and cuss out the truck driver.  He took a picture of the driver and the license plate number and told him he was turning him in.  Apparently he had done the same thing to the truck that passed us.  When Yusuf was done yelling at him, he got in the car and told us he was turning him in to the police.  The whole time, the truck driver had a shit-eating grin on his face and I figured he’d been smoking something.  Glenn got most of this on his video.

We left and as soon as we hit the highway, Yusuf saw a police station.  We stopped and he called a policeman over and proceeded to tell him what happened and show him the pics.  The police man knew the truck, the driver and the owner of the truck and gave Yusuf the owner’s info….  We drove into town to where the owner worked and Yusuf told him what happened.  The owner said he would come to our hotel later in the day and bring the driver to get everything sorted out.  Sure enough he showed up with the driver.  Yusuf was talking to him for quite awhile then Donnie came over and told jus that the driver claimed he wasn’t smiling during the showdown and the owner wanted proof that he was.  Glenn saves the day.  He had it all on video.  They passed the phone around and saw what we said was true.  They apologized to all of us that were in the truck.  Yusuf finally calmed down.  Who knows what’s going to happen to that truck driver now, but he had it coming.  What a day! Tomorrow we leave at 8:30 am for the Maasai village where we will donate the books we brought to the children’s school.  In the afternoon we hit the Serengeti.  Here we come!

Back to Africa Day 2